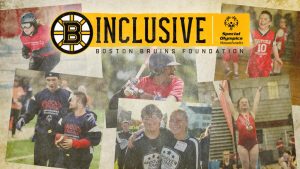 Special Olympics athletes will also be in attendance on Opening Night on Monday, October 8 when the Boston Bruins take on the Ottawa Senators at TD Garden. The athletes in attendance will partake in an array of experiences such as bench assistants, high five lines, and ice resurfacer rides. The Bruins will continue to highlight Special Olympics athletes in game throughout the season.

Since its inception in 2003, the Boston Bruins Foundation has raised over $30 million. This past year, the Foundation donated over $3 million to over 150 nonprofit charities. Organizations receiving grants are aligned with the Foundation’s mission to enhance the quality of life for children in numerous capacities.